In our literature class we were assigned to answer a series of questions after reading the analysis of the poem “For my grandmother knitting. I did this assignment with Silvestre Braun.

END_OF_DOCUMENT_TOKEN_TO_BE_REPLACED

In our biology class we made a drawing on the structures of arteries veins and capillaries. I did the assignment with Silvestre Braun and Rosario Segura. 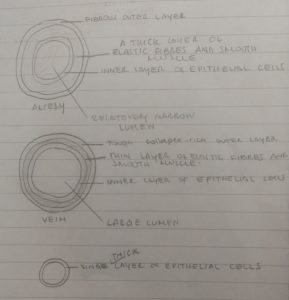 For this second term I chose the book “Bridget Jones: The edge of reason” to read and make a booktube about. This is the booktube I created.

Of the first paragraph (a)

“Depths of the earth” This phrase is powerful because it makes you think about being inside the earth, inside a volcano. It is a powerful image to imagine yourself going into the depths of a volcano. “Portals to Hell” This is also a strong image, thinking about those who thought of a portal to hell and being so scared of them, if you analyze it could even transmit to you the fear those people may have had when thinking about them. “vastness” This words transmits the large base and walls of the volcano, how enormous it is. “the size of three full-sized basketball courts” This phrase also makes reference to the size of the volcano which us readers imagine everything as big as the descriptions they have.

Of the second paragraph (b)

“People whisper” this phrase makes reference to the stories and myths of the volcano, it is a striking choice of words because the things that people used to believe or what they retell from what the have heard is really striking. “a divine palette” this phrase makes reference to the colours that the walls of the volcano have, surely because of the magma they used to present in its depths the colour is shocking to look at because of this reason. “never intended to see” this is a shocking phrase mainly because it refers to the beauty the walls of the volcano hide and it talks about how those walls should be preserved from the humans. It is the nature of the world, the rare things the world has got. “rock faces were glowing red with fiery heat” this phrase makes reference to the past, when the volcano was active and it’s magma flooded it’s walls, it is striking to believe that those walls were once hidden by the hot lava.

Explanation of the words:

Spellbound: fascinate something or someone as though by magic, hold their complete attention.

Unlike: unequal, not the same as…

Awe-inspiring: being impressive or formidable.

In both the story and the novel we have characters who deal with the discrimination because of their skins. Both of them, Martin and Neil suffer the common stares of someone who isn’t used to seeing someone with differences. In the case of Martin at first it seemed to be karma, if he hadn’t had prejudices on people before his accident, he wouldn’t have suffered them himself. But when you continued the story it was clearly something that people tend to do, the prejudices are something that they seemed to have incorporated. The overcast of their lives is basically the struggle with their own confidence. Both of them have trouble with being who they are without caring about people’s reactions because they are closeminded. They both had to learn that people are nosy and will always have something to say about everything. They shouldn’t have to prune on people because of what happens in their lives.