In our Writing & Oral class, with our teacher Dani, we had to create a document based on our favourite holiday photograph and share it with our classmates by giving and Oral presentation.

I made the Document on google drive: With Daniela, our Writing & Oral teacher we created a wanted póster for our classmates, this was created for me by Elena Persic With our language teacher Pilar Pando, we made a written dialogue and we transfomred it into oral, this is the oral i made with the help of a friend.

Only men could vote

Kids were ill-treated in factores and mines

Change in the economic system

The background of the story:

It was written in 1945, but the story takes place in 1912. Priestly was against Capitalism and in the story Arthur Birling is shown as a capitalist man. The story is set in the Edwardian Era, were there was prosperity for the middle class and industrialist. But also, the working class was discontent which led to strikes.

-What are they talking about?

-Whats Mr Birling hoping to get?

-Mr birling vs Geralds mother. What is reveald in this conversation? How does Arthur Birling feel as regards the crofts?

-According to Mr Birling, whats a mans responsability? ( quote from the play)

-They mention ” a scandal” , secrets that may affect characters in the future (literary device?)

In Literature class we finished act ! of «An Inspector Calls» and we answered in different groups answers that are at the end of the book.

this were the questions my group had to answer (Juana P Muñiz, Chivy Correa, Elena Persic and me): This were Other groups’s questions: 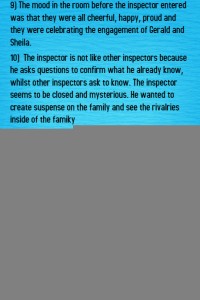 With our teacher Daniela Barra, in Writing & Oral, we played a game on our first class called Name Chain.

The game started with someone going up to the board and she/he writed their name and said something about him/her, what he liked, disliked or anything, and if another person felt the same thing she/he had to stand up and write their name and say another thing besides the thing that the other person had already said. The objective was to lern new things that we might didn’t know about our classmates. I really liked that we got to learn new things about our partners, because there were many things i didn’t know about…

I learnt from, Benjamín Mayol, that he likes to sleep a lot. And i also learnt from Rosario Segura that she likes music, specially Justin Bieber.