In our language class our teacher gave out an assignment which consisted of creating a poster whith quotes of famous people and report them. 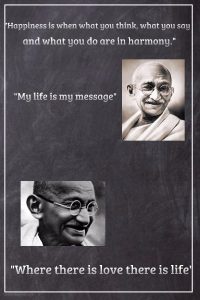 In our history class, with our teacher Lenny Ambrosini, were studying Nazi Germany, and we visited a Museum: ‘Museo del Holocausto». In this Museum we watched a document in which a survivor retells his experience in a concentration Camp. After watching the document we were given a tour by a Lady who taught us diferentes facts about what the jewish were forbidden to do and how they were treated during Hitler’s dictatorship. Here are some pictures: 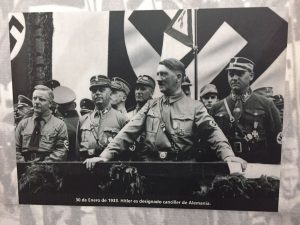 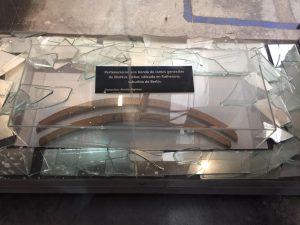 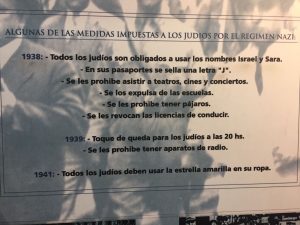 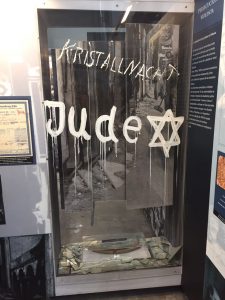 I was unfortunatly ill when we had a Talk with a history teacher about his trips to concentration camps.

2. What attitude does the father, Monsieur Andre Paulhan, have towards the Germans, the Resistance and to his son’s (Raoul) involvement in the war and resistance?

4. How do these lines reflect the Raoul’s feelings at the end of the story: “Someone       who, if suddenly no longer there, can leave a hole in your heart, and a feeling of doom       until the moment he or she reappears.”

5. p401 How involved in the Resistance does Raoul  think that the young girl and his   father are? What does the threat: “Try a nail or two” imply about the father?

6. (p402) What does Raoul do to bring the girl closer to him? How does his father react?

7. Describe Andre’s feelings about religion and about the Petain government. P403 and  elsewhere.

8. Finally the romance with Cecile Viala is in the open  with Raoul’s family p. 403/404    How would you describe their feelings for each other?

9.( p405)  What has prompted Raoul to sabotage the Gestapo officer’s inner tube?

10. What is the faint hope Raoul has for Cecile as she accepts the ride in the car?

11 . The story ends with a reluctant mood to shift with the times. Explain how this is true.

In our language test we had to do an assignment which consisted of watching a trailer in Pilar’s blog and then create a report based on the facts presented on the video.

this was the assignment were you can also find the video.

Yesterday the main bank of Venice, in Spain, was attacked by multiple groups at the same time, while the police was out in the main doors and surrounding the building. People who were at the bank became hostages of the robbers inside. The police are still trying today to arrest the guilty groups who killed or who have been trying to  steal the money, but the press has not yet been informed with any conclusion or event since today morning if this mass event.

The robbers came in directly through the main doors with masks on and also some from the back door. People were thrown to the ground and told to stay quiet and still because if they didn’t they would be killed in the act. Further on, during the afternoon we found out by an insider in the bank that the bankers are also involved in the robbery themselves and during the night a group appeared through the roof and tried to steal the money cutting the roof of the vault in which the money was packed in bags. Now they are all in the same bank trying to steal the same money and we yet haven’t heard if they were able to take the people who have been taking part in this burglary.

Today morning the police were able to take 3 hostages out of the bank but as a consequence 2 people were killed by the robbers.The FBI has been involved in this situation and the SWAT team also, they have been creating tactics to be able to do something with no harm coming to anyone. Robbers and bankers have both tried to negotiate a way out of the bank and threatened to kill more hostages if what they are asking for isn’t provided.

Families have been praying for their family members to come out safely and in no harm, they have helped also the people whose families have been killed inside. And testimonies of people are coming up to the web every minute that passes. The 3 people who have been taken out have given testimonies of the people inside and their situations but they haven’t been able to talk to the press because of how traumatising this event was for them.

In our language class, after finishing reading the short story «Dumb Martian» we were given some questions to answer:

1- What seems to be the attitude in the society about buying female martians?
2- At the beginning of the story, where is Weaver going? For how long? What will his duties be?
3- Describe Lellie’s appearance. Draw a sketch of what you think she looks like.
4- How are we given the impression that Lellie is a mere possession of Duncan? Use quotes.
5- Comment on the fact that Duncan lost to Lellie at chess (a game he had taught her)
6- Where in the story is Duncan’s verbal and physical abuse of Lellie at it’s worse?
7- Weaver describes Alan as: “snoozy, ritzy and nazzy”. What type of language is it and what does it tell us about the differences between the 2 men?
8- Why does Lellie’s question about female emancipation makes Weaver feel so angry?
9- “She was a dumb mart”. Do you agree with this phrase? Explain.
10- What messages of relevance does this story have? (technology, society, personal qualities). Connect the message to our present time.

In literature we have started to analyze a new poem we’ve started reading.

Folly: the lack of good sense or  judgment

Cozen: to decieve, to win over

Source I used to analyze: http://es.slideshare.net/mobile/AlinaClaps/song-by-lady-mary-wroth

Today, some US students from San Diego came to our school. We had an exchange of culture and candies.

Weare not so different. We play the same sports and we know the same tv programs! ey went to see a soccer match to River Plate Stad

On the other hand, we did have differences. They can drive at the age of 15! They can’t go out for lunch, they have stay at their school, and the eat at mid-day and also at night very early.
Finally we wanted to comment that this exchange was really good for us in terms of doing things at school instead of having regular ours because its fun, sharing candy or food and get to know each other and also learning about each others cultures.